Review: Until I Die by Amy Plum 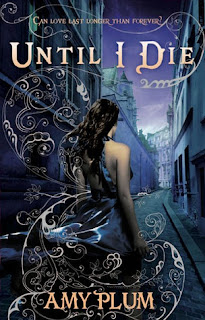 Kate and Vincent have overcome the odds and at last they are together in Paris, the city of lights and love. As their romance deepens there’s one question they can’t ignore: How are they supposed to be together if Vincent can’t resist sacrificing himself to save others? Although Vincent promises that he’ll do whatever it takes to lead a normal life with Kate, will that mean letting innocent people die? When a new and surprising enemy reveals itself, Kate realizes that even more may be at stake—and that Vincent’s immortality is in jeopardy.

In the sequel to Amy Plum's Die For Me, we return to Paris with the entire revenant gang, ready to take on the numas once again. While I liked this book, I felt that it was lacking in some areas and this was probably due to my high expectations. There was something very enchanting and romantic about the first book. Kate and Vincent's love dominated the story and every single page turn was like Christmas! Until I Die seemed to miss this particular element. While Kate and Vincent were extremely sweet with each other, they didn't spend nearly enough time together! Vincent was often away on private missions, leaving Kate all on her lonesome to dig up information on how to stop the revenants from sacrificing their lives without the painful compulsion. The story's pace felt quite slow as a result and I just kept on wishing for the action to start. The beginning of the book was fantastic and drew me in immediately (fight training with the boys!) before I began to realise that things wouldn't be picking up any time soon... This honour was left for the end of the book, which I took great pleasure in reading, I must say!

The plot of Until I Die revolves around a set of questions. How and will Vincent be able to resist saving others for Kate's sake? Who is the new leader of the numa? When will they attack? Who amongst them is a traitor? And what's this mysterious prophecy about? I really enjoyed searching for and exploring the answers, even though the twists, while good, came at long intervals. As the story progresses, a series of attacks and suspicious events occur that have us wracking our brains for who could be behind them and what they all mean. Although I would've liked to have seen more focus on this side of the story, the time that was spent developing these complications were engaging and reminiscent of the fierce showdowns in the first book!

With Kate's demands for him not to die for others anymore, Vincent tries out a new method of living in which he doesn't need to die constantly. He returns daily from these secret experiments with a gaunt face, looking even more dead than he already is. Throughout the book, I resented Kate a little for forcing Vincent in this direction, basically exchanging her pain for his. I thought it was very selfish of her, especially since "dying" doesn't really harm him at all. Kate does, however, take it upon herself to find another solution, uncovering an old story about a revenant healer. Is it just fiction or is there some truth to it? As she decodes the messages and travels to foreign places, she makes intriguing discoveries that puts her in more danger than she bargained for. She sets off a chain of events that will leave you wide-eyed at the end of the book. Honest to goodness, worst and scariest cliffhanger on the planet.

While I was not entirely satisfied with Kate and Vincent in this book, the secondary characters were spot on and tricked me into loving them once again. Old favourites like Ambrose and Jules return with a 100% flirt capacity, and we're also introduced to several new characters! Violette and Arthur are new additions to Jean-Baptiste's revenant group and they're centuries old. Their valuable knowledge about numas are essential, now that the revenants are preparing for a blind battle. After Kate killed Lucien, the numa leader, in Die For Me, the numas have been suspiciously quiet, meaning they're busy concocting a plan of revenge. When, where and who they'll strike is a complete mystery and the teasing attacks throughout the book add some much-needed tension and action to the story! Overall, watching the characters interact with each other was my favourite part of the book, as relationships were developed and new ones were brought up to light. As always, they were entertaining, unpredictable and exciting!

I truly loved the twists that were revealed towards the end of this book. They made it much more worthwhile and had me glued to the pages! Those pesky questions from above were finally answered and they couldn't have been more surprising! As I said, I'm in utter disbelief at the ending, so I need the third book very, very soon. It could possibly be the best in the series, with the direction things are heading, so I just can't wait! Although Until I Die didn't quite meet my expectations, it's still an enjoyable novel that prepares us quite nicely for the next!

I'm in love with the trailer! Which is your favourite sign? ;) Love that Amy was able to rope in some Abercrombie & Fitch models LOL.