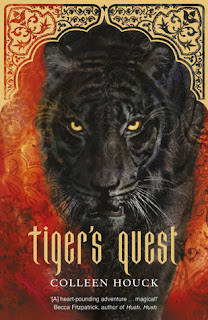 Back in Oregon, Kelsey tries to pick up the pieces of her life and push aside her feelings for Ren. But danger lurks around the corner, forcing her to return to India where she embarks on a second quest--this time with Ren's dark, bad-boy brother Kishan, who has also fallen prey to the Tiger's Curse. Fraught with danger, spellbinding dreams, and choices of the heart, TIGER'S QUEST brings the trio one step closer to breaking the spell that binds them.


At the end of the first book, Ren and Kelsey's relationship is on the rocks, as she's convinced that he'll want to look for "better" girls now that he can be a gorgeous human for 6 hours a day. She settles back into her mundane life in Oregon, going to university and even going on a few dates, but none of the boys compare to her Tiger Prince. It's hard to believe but Tiger's Quest is even more compelling than Tiger's Curse, ratcheting up the adventure and fast-paced storytelling! If the first book didn't convince you of its greatness, all of your doubts will be banished in this one. What a smashing effort by Colleen Houck - this series has got to be at the top of your TBR pile!

While Kelsey's character was somewhat aggravating with her over-the-top descriptions in the first book, Houck's writing improves by leaps and bounds. I loved getting to know Kelsey more in a real-life setting, seeing her take care of herself and doing that bit of growing she missed out on while dealing with the curse. When she meets a boy named Li, who's all kinds of wonderful, she's faced with a very difficult decision. Will she hold onto her complicated relationship with Ren or leave that piece of her behind to start something with someone who completely adores her? I have to admit, Li was charming. In any other book, I would've been waving my Team Li flag around like a crazy person but unfortunately Ren's just unbeatable...especially when he comes to his senses and chases after her...and moves in next door. Amazing, tense, bury-your-face-in-your-pillow-and-scream things follow and well…. You can guess what happens next.

To break the next part of the curse, which will give Ren and Kishan 12 human hours a day, the gang will be dealing with the element of air. It seems like it'll be another Tiger's Curse adventure but suddenly, tragedy strikes and Ren life is in grave danger. Reluctantly teaming up with his wolfish brother, Kishan, Kelsey journeys into the Himalayas, faced with the task of climbing Mt Everest in search of the spirit world. I won't spoil all of the fun riddles for you but I will say that they're grander and more breathtaking than those in the first book. Houck's world-building is stellar and it was a joy to continually learn new things about the supernatural! Kelsey even begins developing a lightning-like power, able to shock things from distances away. Did or did the story not just get a thousand times cooler? The adventure was thrilling in so many ways and I'm killing myself by not going into extreme detail about it. I want you to experience all of the excitement and twists that I did in full!

So if you've read the first book, you'll know that Kishan doesn't hesistate to flirt with his brother's girlfriend. An inevitable love triangle forms and it will leave you torn! While Kelsey's still fiercely loyal to Ren and constantly bats away Kishan's teasing kisses, it becomes obvious to us (eventually) that he's a serious and fair contender for her heart. Their relationship grows very unexpectedly but again, it's something you'll really enjoy. Even with Ren being out of the action, their palpable love at the beginning of the book will be enough to sustain you until the end. Just wait until you read the third book! History is repeating itself, with the brothers fighting over one girl... Who will come out on top?

Unlike Tiger's Curse, I don't have any complaints about this book. All of the characters are well-developed and Houck proves to us that she's able to see this ambitious plot through to the end. The cliffhanger at the end of the book left me devastated and shocked. I haven't seen it happen in YA before and...just trust me when I say that you'll have to have the third book before you read this one. Immediate continuance is necessary because you won't want to stop in between books!

Is this series fantastic or what? Team Ren? Team Kishan? :)