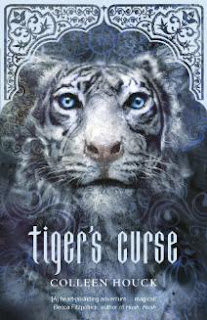 The last thing Kelsey Hayes thought she’d be doing this summer was trying to break a 300-year-old Indian curse. With a mysterious white tiger named Ren. Halfway around the world. But that’s exactly what happened. Face-to-face with dark forces, spellbinding magic, and mystical worlds where nothing is what it seems, Kelsey risks everything to piece together an ancient prophecy that could break the curse forever.


Alagen Dhiren, Prince and High Protector of the Mujulaain Empire, has been imprisoned by his father-in-law and threatened with his life, unless he forfeits his piece of the Damon Amulet and the Mujulaain forts. Betrayed by his fiance and younger brother, Kishan, the prologue comes to a dramatic end just as blood is shed. Fast forward 300 years to Circus Maurizio where Ren is a beautiful white tiger and Kelsey Hayes begins working after just graduating high school. This magical story will pull you in immediately with its unique and addicting premise, so definitely count on taking a few days off just to read the entire series in one go. These books are long but entirely worth it, as we're gifted with an epic adventure tale we've always wanted.

Kelsey's life changes forever after she watches the circus performance on her first night at work. A powerful tiger catches her eye while he's jumping from platform to platform and the fascinating creature has her captivated. After she gathers enough courage to visit him in his cage, the two begin to form a thrilling relationship that will leave you squealing and grinning in excitement. Ren is the most adorable (sexy?!) creature you will ever meet, with his innocent interest in Kelsey, teasing brushes, purrs, licks and nibbles. Kelsey speaks to him like a person and even reads him poetry, making him fall more and more in love with her with each passing day. Ren knows she's special and is the one who can break the tiger's curse that befell him so long ago. Watch as this enchanting story unfolds, and prepare to keep on falling in love with these two over and over.

When a rich man comes to the circus and says he's taking Ren back to a reserve in India, Kelsey is devastated, having formed a close bond with the tiger. Imagine her surprise and delight when he asks her to come along as Ren's caretaker! Here's when the story becomes a little inconceivable and Kelsey's life takes a turn for the luxurious, but suspend your disbelief and concentrate on the amazing story that will continue on from here, okay? We learn (as Kelsey does eventually) that Ren is actually a man who can take a human form for only 24 minutes out of a 24 hour day. This only makes their time together more precious and the story that much more tense. To break the curse, Kelsey must find the four gifts and make five sacrifices to the goddess, Durga. Confusing and mysterious, I know. Houck does a fantastic job creating these puzzles and turning Tiger's Curse into a truly breathtaking read. I've never read such an exciting book in my life! We usually use the term "adventure" quite loosely but Kelsey quite literally journeys into the jungle, deciphers riddles, dodges predators, manoeuvres through dangerous booby-trapped caves and so much more. It was like a magical movie you never wanted to end!

A negative of this book that's important to note is Houck's attention to detail. It was too much and complete overkill at times. The long story about how Kelsey likes to arrange her hair ribbons? Unnecessary! But before you go scratching the book off your TBR list, I'll tell you now that this problem is fixed in the sequel and even gets better as this book goes along. It's just more obvious at the beginning of the book so KEEP GOING. This series is so fantastic and it'll be a shame if you give up before you get to the good bits!

Tiger's Curse will shower you with sweet romance, light humour, difficult riddles and, of course, impressive action. Houck has created a magnificent world with lots of story to tell, but I think she's got it by the scruff and manages to do the idea justice. She balances the plot with character development so well, and a million things will have you cheering in this book. Magic is very present in the novel and you'll have immense fun discovering it little by little as the story progresses. The ending of Tiger's Curse had me gaping in the worst way, making me scramble for the sequel immediately. Trust me, you WILL want the entire series on hand before you begin reading, and not just because they're insanely addictive...

I don't know if this review even communicated properly how AWESOME this series is. Hopefully the above is enough to get you interested… Other two reviews for the series will be up this week but until then, get ordering! <3 The sequel's even better!