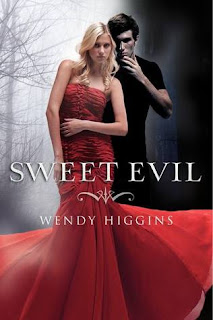 What if there were teens whose lives depended on being bad influences? This is life for sons and daughters of fallen angels in Sweet Evil. Tenderhearted Southern girl, Anna Whitt, was born with the sixth sense to see and feel emotions of other people. She’s aware of a struggle within herself, an inexplicable pull toward danger, but it isn’t until she turns sixteen and meets the alluring Kaidan Rowe that she discovers her terrifying heritage, and her will-power is put to the test. He’s the boy your daddy warned you about. If only someone had warned Anna. A cross-country trip to meet her father forces Anna to face the reality that hope and love are not options for her kind. When she confronts her destiny, will Anna embrace her halo or her horns?

The first time Anna Whitt laid eyes on Kaidan Rowe was when her best friend, Jay, dragged her off to watch his band, Lascivious, play. Sultry and enticing, the drummer with a rich red centre immediately knows she's special from across the room…and she can't help but feel the same. With the ability to see others' emotions, Anna's confused about what she sees in Kaiden and a series of mindless decisions then lead her into the dark and dangerous world surrounding his family. Who is she really and what is her destiny?

Anna is probably the most "innocent" character I've ever come across in YA. To her, lying is almost like killing a puppy and her strict adoptive mother, Patti, certainly doesn't help with her paranoia and demands to call every five minutes! At times this constant "goodness" annoyed me but luckily half-demonic Kaiden is there to balance this all out. The romance is probably what I enjoyed most about Sweet Evil. Higgins wrote a guest post on sexual tension for my shared blog event…and let me tell you, she knows exactly what she's talking about. Kaidan is literally lust personified and I can't imagine how Anna didn't sink her claws into his back the moment she ran into him backstage! I always held my breath during their scenes together and might've felt compelled to run to the fridge for ice more than once when they kissed! Rich, English and just slightly smack-worthy…Kaidan's a complicated character you may love or hate. I would've liked to have seen a bit more development in regards to their relationship, but I'm sure we'll see more later and their moments are just sweet enough for now.

I expected Sweet Evil to be filled up to the brim with romance and action. While Higgins delivers fairly well on the former, the action was a little lacking. The novel took a while to warm up and eventually did get there, but I still didn't feel as if anything HUGE happened. Kaidan's father is the head of Pristine Publications, a pornography company, and is nothing if not powerful. He's one of the twelve dark angels in the world and forces his "children" to be bad influences. I'm hoping we find out more about this whole idea in the sequel because it becomes a huge wall in Kaidan and Anna's relationship. He has to "work" every night (aka get friendly with some other girl) and I'm sure you can imagine how Anna feels about that… So in an attempt to question her father about her true background, Anna and Kaidan drive together to California. She discovers that her life is about to change forever and that she's an essential piece in the upcoming battle between the guardian and fallen angels. Oh how the plot thickens...

While I really loved the concept of this novel and had a lot of fun picking apart the mythology, I really needed MORE. More explanation as to why certain things were a certain way, more character development and a slightly faster pace. Sweet Evil has a unique story that I'm really looking forward to learning more about, so fingers crossed that Higgins comes through for us in the sequel! I think this series has a lot of potential and we just need to tap into that special source ;) Bring on the Dukes and their Sins!

Find Wendy on Twitter, Goodreads, Facebook and her blog.
Buy Sweet Evil from Amazon, The Book Depository and Barnes & Noble.