Review: Out of Sight, Out of Time by Ally Carter 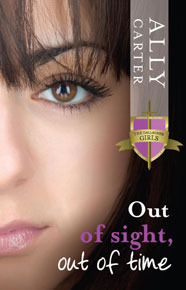 The last thing Cammie Morgan remembers is leaving the Gallagher Academy to protect her friends and family. But when Cammie wakes up in an alpine convent and discovers months have passed, her memory is a black hole. The only traces left of Cammie’s summer vacation are the bruises on her body and dirt under her nails. All she wants is to go home. But even the Gallagher Academy now holds more questions than answers as Cammie and her friends face their most difficult challenge yet. With only their training and a few clues to guide them, the girls go in search of answers on the other side of the world. But the Circle is hot on their trail and will stop at nothing to prevent Cammie from remembering what she did last summer.

The books in the Gallagher Girl series only get more intense and complicated as they go along and this fifth installment is no exception. Cammie Morgan is no longer the best spy at Gallagher Academy for Exceptional Young Women. Some would say that she's unstable and losing her touch...and they'd probably be right. After fleeing the school without a trace at the end of the last book, Cammie finds herself at a convent in the mountains with no recollection of the past four months. She left to find answers about her dead father and to protect her loved ones from the menacing Circle of Cavan, but what has she gone and gotten herself into? After she's found and flown back into the safety of Gallagher Academy's gates, Cammie and her companions try to piece together the missing pieces of her disappearance. Where did she go? Who was she with? And why can't she remember a thing?

Almost all of the relationships in Out of Sight, Out of Time are strained after Cammie's unexpected return. While her best friends are (secretly) furious that she left without them, her boyfriend, Zach, is distant and seemingly close to another girl. It was very difficult for me to relate to the walking-on-eggshells atmosphere, being so accustomed to the easy banter and camaraderie between everyone that's usually in these books! Although we do eventually make some progress, I still wish Carter had spent some more time exploring the secondary characters, and while I do understand that this novel is primarily about the secrets locked within Cammie's mind, it really wouldn't have hurt to expand the story's focus to include the important people in her life who have a great influence.

But on the topic of Cammie's mind...it's filled with holey memories that taunt and tease at something more, something just barely out of her reach. Expect some shivers to tingle up your spine when Cammie mindlessly assembles a sniper's rifle in seconds or when she begins hearing and humming an unknown melody in her head. I felt that these moments were truly chilling, psychologically, especially when it's revealed that Cammie underwent some form of torture during the time she was gone. Who knows what could've happened to her? It is possible for her state of mind to ever recover?

Join Cammie as she jets off to Rome with the gang for answers about her mysterious disappearance. With the clock ticking down, soon her time will run out and she'll find herself dead. Dodge assassin bullets, decode life-changing messages and chase after potential clues, all the while keeping your eyes open for a traitor you will never expect. That twist threw me so much I had to reread the page multiple times to comprehend what happened! Out of Sight, Out of Time is another great novel by Carter but it unfortunately doesn't make my favourites list. Although the mysteries and moments of action were thrilling, there were one too many lulling moments and it lacked the strong reader-character connections we're so used to having. Those are most definitely the strengths of this series so hopefully we'll see them returning in the very final book!

What do you think of this series? Love it? Hate it? Interested in starting? :) Hopefully this review's put you more on the positive side. Gosh, I really shouldn't be writing anything on so little sleep......