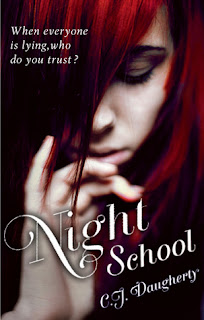 Allie Sheridan's world is falling apart. She hates her school. Her brother has run away from home. And she's just been arrested. Again. This time her parents have finally had enough. They cut her off from her friends and send her away to a boarding school for problem teenagers. But Cimmeria Academy is no ordinary school. Its rules are strangely archaic. It allows no computers or phones. Its students are an odd mixture of the gifted, the tough and the privileged. And then there's the secretive Night School, whose activities other students are forbidden even to watch. When Allie is attacked one night the incident sets off a chain of events leading to the violent death of a girl at the summer ball. As the school begins to seem like a very dangerous place, Allie must learn who she can trust. And what's really going on at Cimmeria Academy.

Night School is one of those books that sneak up on your heart before you even know it. I was immediately enamoured by the striking characters and wanted to throw myself into the seductive and intriguing world of Cimmeria Academy. I lost myself in the addictive story and it was a struggle to leave Allie's side for even a second! Boarding schools, secret societies, mysterious boys and hidden pasts...I think I have a pretty good reason to be obsessed with this series! What a brilliant debut novel by Daugherty - I absolutely cannot wait to jump headfirst into the sequel.

Having almost been arrested for the third time this year, Allie Sheridan's parents have no choice but to send her to a private boarding school. But why is it that no one's heard of it? Why is it so strict? And why does everyone else have parents who were former students, when Allie has absolutely no connection to the exclusive school whatsoever? These questions are eventually answered after truckloads of red herrings, dangerous investigations and unexpected revelations but have fun trying to suss them out in the mean time! The mystery in Night School is truly fabulous, developed on so many levels and involving so many factors. Everything is connected and you will have the most exciting time discovering all of the secrets hidden within the walls of the Academy. With chilling murders and the secretive Night School group, this compelling thriller will hold your interest from beginning to end! The author has created so much depth in her novel and built a stunning atmosphere that will quickly encompass you within its embrace...

Night School is filled with delicious romance, containing an intense love triangle you just won't be able to resist. When she was alone and afraid upon entering the school, the gorgeous and French Sylvain takes her under his wing, acting like a perfect potential boyfriend. Having popularity and power at the school as well as gentlemanly charm, Allie never expected broody Carter West to warn her about letting him in. Allie has her hands full no matter which way she turns, unsurprisingly because both love interests ensnared my heart upon first meeting. Whereas Sylvain offers her an effortless and dazzling ride, every moment she shares with Carter is sizzling with palpable passion and shocking intensity. Don't be expecting a cheesy romance between two-dimensional characters because you 100% will not find it. All three are extremely well developed and either man would suit Allie perfectly. Night School had me tossing and turning in bed with these struggles but I'm desperate to experience it all over again!!

No matter how much I gush about this book and its complex storyline, nothing will beat you actually reading it yourself. There are so many more important elements of the story that I haven't even begun to discuss but boy will you be overjoyed when you crack this baby open! I know I've said it a lot this year, but this book is on my favourites shelf! If you trust me at all, YOU WILL READ THIS. Jump into this thrilling world and explore the complicated lives of the elite, whilst trying to solve the mind-boggling puzzles Daugherty just dares you to. Sleep with your eyes open otherwise you might find yourself dead before the night's through; who can you trust in a place where everyone has a secret? There is an overwhelming amount of engrossing build-up but you will finish this book feeling mushy, exhilarated and completely satisfied. I can't say it enough - a brilliant brilliant read that will please even the most picky reader!

Wow. I brought out the big guns. Bolding AND underlining. *snickers* But seriously...read this. *stalks you until you do*

5. Students in certain advanced areas of study take part in Night School. Only a few, select students are offered this opportunity; if you are not among them, you must not attempt to interfere with or observe Night School. Anyone attempting to do so will be expelled.
6. The identities of those involved in Night School are secret. Anyone who attempts to find out their identities will be punished.
7. ALL Night School activities are secret. Any member of Night School found to be divulging the details of those activities will be punished severely.
- Excerpt from the Cimmeria Academy rule book (INTRIGUED?)