Review: Losing It by Julia Lawrinson 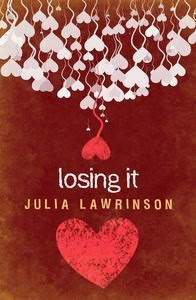 To avoid Losing It in the bushes with some random guy in a heavy-metal T-shirt after too many tequila shots, four best friends make a bet: to lose it before schoolies week – and preferably in a romantic, sober way that they won't regret. What follows is a sometimes funny, sometimes awkward, but always compelling comedy of errors as Abby, Mala, Bree and Zoe each try to find their Mr Right . . . or at least get laid.

In this story about getting an inconvenience out of the way and finally entering womanhood, four young girls realise that sex isn't all it's cracked up to be. But then again, how often is it when it's not with someone you're attracted to and only lasts ten seconds...? Thinking they'd rather be in control of their devirginisation without the ugly side effects of alcohol, Zoe, Abby, Mala and Bree create the Great Virginity Challenge in hopes of losing their V-cards by the end of the year. They vow not to tell each other about their progress until the Challenge ends, so how will they fare with the slim pickings being offered?

Losing It is told in five parts, the first being a short introduction to the Challenge, and the others all following the individual journeys of the four girls, giving us four unique stories in the one book! I thought this format was a brilliant choice and suited the novel extremely well, as the differences between them became startlingly obvious and were laid out bare for all to see! For such close friends (Group Nickname: the GeeGees), they really couldn't have been more different! Losing It is filled with short flashbacks and with each perspective, we see new takes on some of the same situations. Not only do we get to see the formation of their group many years ago, but also the obstacles they met along the way... This review is very difficult to write because I don't want to spoil anything. Even though it's a contemporary about teen sex, there's a good amount of mystery in it! What are the girls really like deep down? Who do they have sex with and how does it happen? It's highly enjoyable watching the story unfold! After a short while…you'll notice something fairly INTERESTING and well, you'll be rushing to the end from there. I know, I'm vague…… *grins*

I thought Losing It was a quick and light read that brought a sense of realism to the plate without being too serious. There are certainly some hilarious coincidences in the story that ratchet up the entertainment factor but essentially, we have four Australian teenagers with the common idea of "getting it over and done with". Some of these stories are sweet, some are sad and others are just plain awkward - "shut your eyes and pretend people can't see you if you can't see them" awkward - but all in all, I found the journey and the four main characters highly likeable! Lawrinson has done a great job tackling this sticky issue (excuse the pun...) so definitely give it a try if you get the chance!

What do you think of this one? Interested? Yay for more Aussie authors!

Find Julia on Twitter, Goodreads, her website and blog.
Buy Losing It from Amazon and The Book Depository.
Posted by Lisa at 9:00 AM