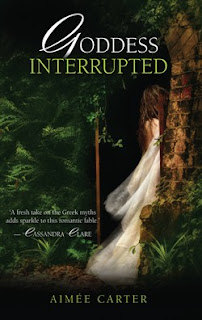 Kate Winters has won immortality. But if she wants a life in the Underworld with Henry, she’ll have to fight for it. Becoming immortal wasn’t supposed to be the easy part. Though Kate is about to be crowned Queen of the Underworld, she’s as isolated as ever. And despite her growing love for Henry, ruler of the Underworld, he’s becoming ever more distant and secretive. Then, in the midst of Kate’s coronation, Henry is abducted by the only being powerful enough to kill him: the King of the Titans. As the other gods prepare for a war that could end them all, it is up to Kate to save Henry from the depths of Tartarus. But in order to navigate the endless caverns of the Underworld, Kate must enlist the help of the one person who is the greatest threat to her future. Henry’s first wife, Persephone.

WARNING: There are spoilers for the The Goddest Test in this review so watch out if you haven't read it. It will ruin any surprise…

I went into reading this with some apprehension because I was not a fan of the dull characters and plot from the first book. Was Goddess Interrupted an improvement? Definitely! At the end of The Goddess Test, Calliope was sentenced to spend time with each one of Henry's potential wives she had killed and wouldn't be set free until every single one forgave her. You'd think she'd be stuck there forever (really…would you forgive her?) but you'll be shocked to discover that her father, Cronus the King of the Titans, is awakening and slowly regaining his power with her help. If Kate and the other immortal gods don't stop them, the world will be destroyed and everyone will die. No pressure, right?

After going to Greece for six months with her best friend, James, Kate is finally returning to Henry so that she can finally become Queen of the Underworld and, more importantly, Henry's wife. Excited to continue her relationship with him, Kate's horrified when he doesn't even give her a kiss hello and still seems like a reluctant participant in their relationship. Henry's deep set fears about her leaving him have prevented him from really falling for her. He fell in love with Persephone, Kate's sister, hundreds of years ago and she went and left him for the gorgeous but mortal Adonis. Kate and Henry's relationship becomes so much more complicated in this book but in a good way. We see something other than Henry being passive, and we get to explore a lot more of his vulnerabilities. There are quite a few moments that will provoke cheering and others…crying. What a rollercoaster! It really is a mystery to figure out whether Henry will ever return Kate's feelings for him full force. Is he marrying her out of obligation to the Underworld or is he only keeping himself alive? (Immortals die without a purpose.) Get ready for progress to be made before it's wiped out in just seconds... Oh my poor heart…

When Henry's kidnapped by Cronus, the only way they can defeat him is if they find where he's been imprisoned. To do that, Kate must wander aimlessly through the Underworld until she can find Persephone who, other than Henry, is the only person who knows where that is. Kate was a much stronger character in this book, I think. She took charge and made it her mission to do what everyone else was afraid to do and was willing to risk her life for Henry, even if he didn't want her and even if she had to ask his ex-wife for help to do so. She grows a backbone, successfully manipulates her enemies and even develops the ability to see things that are happening elsewhere, sort of like astral projection but asleep. Yes, she's "needy" at times but her determination to save everyone is very admirable.

Many relationships come to light in Goddess Interrupted. Persephone and Kate's other best friend, Ava, refuse to stop arguing about men and their beauty (SO entertaining), James offers Kate his love instead of Henry's and….you'll learn lots more about the relationships between the other immortals that I'll keep a surprise for you ;) They're all very messy and a little shocking! If you hated the lack of action in book one, this sequel will definitely satisfy because everyone is constantly on the move. There's so much uncertainty surrounding Kate's romance with Henry…I may have punched the book a few times and wiped at some misty eyes. Still, my heart feels heavy and filled with worry…especially after that cliffhanger. There's the mid-tragedy cliffhanger and then there's the "No, don't stop! I WANT MORE!" cliffhanger. This one's the former with some gasp-worthy twists mixed in… Eek!

Have you read this? How did it compare to book one? :)