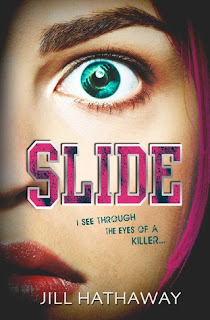 Vee Bell is certain of one irrefutable truth—her sister’s friend Sophie didn’t kill herself. She was murdered. Vee knows this because she was there. Everyone believes Vee is narcoleptic, but she doesn’t actually fall asleep during these episodes: When she passes out, she slides into somebody else’s mind and experiences the world through that person’s eyes. She’s slid into her sister as she cheated on a math test, into a teacher sneaking a drink before class. She learned the worst about a supposed “friend” when she slid into her during a school dance. But nothing could have prepared Vee for what happens one October night when she slides into the mind of someone holding a bloody knife, standing over Sophie’s slashed body. Vee desperately wishes she could share her secret, but who would believe her? It sounds so crazy that she can’t bring herself to tell her best friend, Rollins, let alone the police. Even if she could confide in Rollins, he has been acting off lately, more distant, especially now that she’s been spending more time with Zane.

While Sylvia Bell claims she suffers from narcolepsy, her mind, in actual fact, detaches from her body and merges with another. She's able to see what that person sees and feel what they feel, but has no control over her actions. After sliding into a body with a bloody knife in her hand, Sylvia makes it her mission to find Sophie's killer, because all signs foretell that there'll be more danger ahead and after another shocking death in her school stuns the town, she knows if she doesn't solve the mystery fast, she or her family will be next. Sometimes the enemy's closer than you might think, despite how much you don't want it to be true... So how much can you really trust those around you?

Slide was a brilliant murder mystery that had me hooked from the first page. We're immediately shown how "sliding" works; how objects with emotional imprints on them trigger the slide. Vee's ability to only see from the body's eyes works so well for this book. Unless her host steps in front of a mirror, she has no clue who she's in. She receives fragments of the mystery and murder with each slide and every uncovered clue she finds sends her in a different direction for the chase. The killer could literally be anyone, from her bitchy sister, to a suspicious teacher, the school bully and her next door neighbour. Hathaway's suspense-building is absolutely exceptional. I only managed to guess the killer when she wanted us to...just before she sent me reeling again with an unbelievable turn of events. You will NOT see this coming, I swear. My mouth: Gaping.

The characters in this book are very well-written and developed, Hathaway really nailing down their personalities, backstories and possible motives as the killer. Vee has important relationships with Rollins, her best friend, and Zane Huxley, the beautiful new guy in town. They contrast each other so well, with Rollins acting distant and Zane being the perfect boyfriend! Vee's relationship with Rollins is strained, as he's keeping secrets and jealous of her new companion. Zane, on the other hand, will have you eating out of the palm of his hand and begging to have him for yourself. I fell deeply in love with him, so much so that I wouldn't have noticed if Rollins had fallen off a cliff.. Zane's that blinding. *grins* Having said that, you really can't help but be curious about Rollins. He and Vee have this alluring and complicated thing between them that you just want to explore! Lots of delicious, twisty goodness between these three. Well done, Jill!

Vee's the nice girl you can relate to easily. You'll join her every step of the way on this manhunt, although you really won't be of any help at all.. Slide is filled with shocking discoveries (not even related to the murders!) and fast one-eighties that make this a very compelling read. A great thriller with an engaging romance - what a fabulous debut! My notes were filled with "JAKFNBAHBFNADJBHAFKANFJKBA" every time Vee kissed Zane - no joke. You'll love how Hathaway explores all of the different relationships and, hopefully, how the story plays out! Even though she addresses all of the loose ends, I'm very thankful there'll be a sequel so we can really tie them tight ;) Definitely a book you should run out and buy!

I only just recently discovered there will be a sequel of this! Awesome much? <3


Find Jill on Twitter, Goodreads, Facebook and her blog.
Buy Slide from Amazon, The Book Depository and Barnes & Noble.