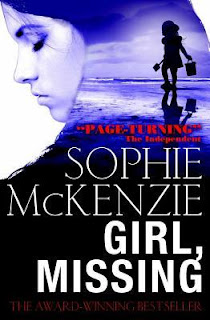 
Lauren has always known she was adopted but when a little research turns up the possibility that she was snatched from an American family as a baby, suddenly Lauren's life seems like a sham. How can she find her biological parents? And are her adoptive parents really responsible for kidnapping her? She manages to wangle a trip across the Atlantic where she runs away to try and find the truth. But the circumstances of her disappearance are murky and Lauren's kidnappers are still at large and willing to do anything to keep her silent...
Girl, Missing is an easy read that will entertain those looking for a light adventure. After Lauren Matthews discovers that she's actually Martha Purditt, who was stolen from her parents as a child, she finds her parents reluctant to talk about her supposed closed adoption, making her suspicious about their involvement. Fleeing from the airport with her best friend in tow, she's determined to find answers about her real family. The two parts of the book, significantly titled Finding Martha and Finding Lauren, both deal with Lauren's slow discovery of what her life means and how she'll move on now that everything's changed. For better or for worse, who knows?

There are engaging mysteries in this book that would've been enjoyable, had it not been for Lauren. As a young teenager, her behaviour should be excused but I can't bring myself to do it. I know at fourteen I wouldn't have made such rash decisions (on a huge scale!) or been so frighteningly self-centred. I don't know if it was the author's intention to make her main character this way for development reasons, but I certainly hope so! Otherwise, just kill me now. "Why was he acting like this was my fault?" No comment...

Throughout the book is a very subtle romance that helps tie the plot together. From the very beginning, readers will see that Jam, her best friend since primary school, is romantically interested in her. He refuses to leave Lauren on her own so he always goes along with her risky plans, being pulled into dangerous situations that are bigger than just the two of them. Overall, he's the sweet guy you can take home but does Lauren see it at all? No, she's too busy minding her own business. I admit, her total ignorance about almost everything annoyed me, but they do have some sweet moments together you can appreciate.

Girl, Missing's action begins on page one. Soon after the book begins, Lauren makes the discovery and gets thrown into the thick of things. With people determined to keep her history a secret, she'll face criminals, dangerous folks in the dark and more! Sometimes things were just hard to imagine though. Are we meant to believe that, at fourteen, these kids could just fly around the country with barely any money and not get killed by their attackers or caught by the authorities? That they would be able to survive on their own? This doesn't happen in real life and coincidences (conflict-solving-wise) don't exist. I don't care that this is fiction - my belief was not suspended!

In saying that, this book isn't all bad! Once you get past Lauren's immaturity, you might find yourself enjoying the mystery. With confusing diaries, memories and secrets with a few small twists thrown in for good measure, McKenzie has set up a good backstory for the sequel, which I enjoyed much more. Even with the disappointing lead, I found myself really liking all of the secondary characters so I guess that's another plus! Girl, Missing deals with the issues of not knowing where you quite belong and not appreciating what you have until you've lost it. Interesting but flawed!

Really disappointed that I didn't love this. It's not often you see a negative review on my blog, is it?
Find Sophie on Twitter, Goodreads, Facebook and her website. Buy Girl, Missing from Amazon, The Book Depository and Barnes & Noble.
Posted by Lisa at 11:30 AM