Review: The Way We Fall 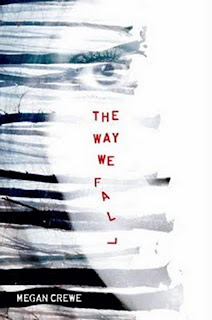 When a deadly virus begins to sweep through sixteen-year-old Kaelyn’s community, the government quarantines her island—no one can leave, and no one can come back. Those still healthy must fight for dwindling supplies, or lose all chance of survival. As everything familiar comes crashing down, Kaelyn joins forces with a former rival and discovers a new love in the midst of heartbreak. When the virus starts to rob her of friends and family, she clings to the belief that there must be a way to save the people she holds dearest. Because how will she go on if there isn't?
The Way We Fall is a dark dystopian that follows the spreading of an unknown virus. The novel is split into three parts - Symptoms, Quarantine, Mortality - making it obvious that many of the small town islanders won't come out unscathed. While I did have some issues with the book, I was impressed with how the story felt so realistic. Don't be looking for magical cures or rescue boats because they're not coming. Everyone's on their own and fighting for their lives.

16 year old Kaelyn is a shy outsider but proves to be strong and brave when she volunteers to help out around the dangerous town. While she's a good character in theory, I didn't feel a strong connection with her or any of the other characters, for that matter. I thought they all had so much potential but too much time was spent unfolding the plot (and slowly, at that) to develop them more. As the synopsis states, there's an unexpected friendship and romance, both of which I enjoyed, but they too were underdeveloped. Crewe has set up the foundations of a great novel but a better balance of plot and character development would've really pulled everything together and made them work.

The story is told through letters, though I'm unsure of whether it's for the entire novel. Kae starts off writing to Leo, her friend who now lives in mainland New York, but after the first few letters, it begins turning into some sort of narrative prose. The writing seems to switch back and forth - an inconsistency, I think, rather than something intentional. For them to be letters, there was too much recounting than any true emotion. Leo's role is never expanded either, making me question what the purpose of the letter format was at all. Wouldn't first person narrative have worked just as well, then?

As more and more people die, the sense of hopelessness is palpable. The Way We Fall is great in that it allows readers to see how the situation begins and escalates, and how each person in town changes with desperation, but the story just moved too slowly for it to be truly exciting and suspenseful. We're left with many loose ends and an abrupt ending, so one can only wonder if there'll be a sequel where these characters can develop into what they're capable of. This was an unfortunately mediocre read for me but I'm sure others will have better luck!

Have you read this book? What did you think?
What would you do if you were stuck in a situation, Contagion or Quarantine style? ;)
Find Megan on Twitter, Goodreads, Facebook, her website and blog.
Buy The Way We Fall from Amazon, The Book Depository and Barnes & Noble.