Review: Top of the Class 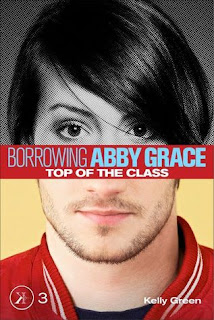 Smart and sassy Abby Grace is a seventeen-year-old with a talent for getting out of trouble. Sent to repair the lives and loves of teenagers on the edge of disaster, Abby is the perfect girl for the job. She has everything going for her… except one thing: a body. Now Abby finds herself in a boy’s body for the first time, where she has to fumble her way through a secret love affair, while getting to the bottom of a grade-tampering scandal that could send her to jail.
I've really enjoyed reading this whole series so far, but Top of the Class is most definitely my favourite! Not only is the conflict more serious than the first two but….Abby Grace wakes up in the boy of a teenage male. While he's in bed with a girl. Seriously? This is the stuff of gold! The third episode follows Abby's time in high school as Eric, her body, deals with a "complicated" romance and a framing that could send him to jail. The stakes are high so fingers crossed she solves the mystery in time!

Firstly, it was great to see Eric's relationship with his girlfriend play out. Who she is is a big spoiler in itself but just know that it's a bit shocking. Eric's life is a war zone at the moment and I loved seeing Abby take action to wrangle it back to normal! Again, the mystery and plot are constructed very well and I'm always surprised at how much action is fit into so few pages! It's exciting and fun from beginning to end, and little twists relating to the overall story arc are thrown in as well. I can't wait to see where Green takes this story next!

I felt the personalities really shine through this time. We're getting to know the characters better and better with each episode, and I'm looking forward to Will's character being expanded further the most. Abby's ghost guide is an obvious love interest and he's now beginning to share his feelings with her. Isn't that cute? *pinches cheeks* He always appears randomly but does help her whenever and as much as he can!

As always, you won't guess how it ends! As soon as you decide it's "obviously this person", Green turns things around and sends you in a completely different direction! You'll have to think ahead five steps to figure things out ;) Very much looking forward to episode four!

Find Kelly on Twitter, Goodreads and Facebook.
Buy Top of the Class from Amazon.
Posted by Lisa at 6:51 PM