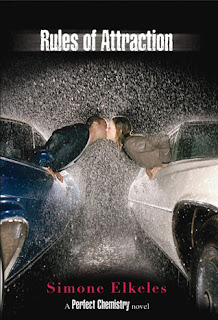 When Carlos Fuentes returns to America after living in Mexico for a year, he doesn’t want any part of the life his older brother, Alex, has laid out for him at a high school in Colorado. Carlos likes living his life on the edge and wants to carve his own path—just like Alex did. Then he meets Kiara Westford. She doesn’t talk much and is completely intimidated by Carlos’ wild ways. As they get to know one another, Carlos assumes Kiara thinks she’s too good for him, and refuses to admit that she might be getting to him. But he soon realizes that being himself is exactly what Kiara needs right now.
Rules of Attraction is very different to Perfect Chemistry, so there's no need to worry about the same story being rehashed with a different brother. After the events of the first novel, where Carlos was sent to live in the safety of Mexico, he's now returning to America without any dreams or ambitions. He's perfectly content with his life in the gang, despite the disappointment of his older brother. Whereas Alex spends Perfect Chemistry attempting to distance himself from the Latino Blood gang, Carlos is someone who has to realise it's not good for him first. Here's where boy-hating Kiara comes in, bitter from past boyfriends and out for revenge. Can you say MEEOW?

Like in the first book, Carlos and Kiara don't hit it off immediately. While there's an instant physical attraction, it takes them both a while to like what they see on the inside. I adored these two characters! Kiara has a stutter, which she can usually control, but it all comes apart when she's nervous (hint: Carlos makes her very nervous). While we get to see her vulnerable side, she has a strong personality and is able to handle herself very well too. Did I mention that she can really think up devilish pranks? Stale cookies and magnets - that's all I'm going to say! Carlos is obviously troubled and isn't afraid of danger. After drugs are planted in his locker, he has to join a reach program to avoid jail and guess what? HE MOVES IN WITH KIARA. Oh the fun, intense times.

The best thing about Rules of Attraction is probably the character growth. As Carlos acclimates to Kiara's family, we see his sweet side as he befriends her younger brother and finds support in her parents. The two bring out the best in each other and it was heart-warming to see how they both changed for the better! Once again, the gangs won't just let them be a happy couple. There are complications. There is action. There are smart plans and maybe not so great outcomes. You'll have to see for yourself!

This was another great book by Elkeles and a great continuation of the series. She made us fall in love with new characters while still giving Alex and Brittany a few cameos! I really like how the sequels are written as if they're spin-offs. We're getting a new perspective and entirely different adventure in the same world with the characters we already know and love. A win-win situation!