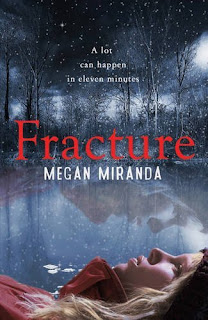 Eleven minutes passed before Delaney Maxwell was pulled from the icy waters of a Maine lake by her best friend Decker Phillips. By then her heart had stopped beating. Her brain had stopped working. She was dead. And yet she somehow defied medical precedent to come back seemingly fine —despite the scans that showed significant brain damage. Everyone wants Delaney to be all right, but she knows she's far from normal. Pulled by strange sensations she can't control or explain, Delaney finds herself drawn to the dying. Is her altered brain now predicting death, or causing it? Then Delaney meets Troy Varga, who recently emerged from a coma with similar abilities. At first she's reassured to find someone who understands the strangeness of her new existence, but Delaney soon discovers that Troy's motives aren't quite what she thought. Is their gift a miracle, a freak of nature-or something much more frightening?
When Delaney Maxwell falls into a newly-frozen lake and is trapped under the ice, Decker Phillips is held back by his friends and unable to save her immediately. Being under for eleven minutes, she should be 100% dead. She's alive. Her doctors say she's brain dead and will remain in her coma. She wakes up. The cat scans of her extremely damaged brain show that she should have memory loss, a speech impediment and so much more. She's fine. Fracture follows the mystery of the strange pull the dead have on Delaney, as she battles to understand her ability and save those she's drawn to. Troy Varga believes they can't save anyone and shockingly takes things into his own hands, becoming desperate with his own agenda. While I did enjoy the book and love the concept, Fracture didn't suck me in and earn itself a "favourite" label.

I enjoy mystery books. I love the suspense and adventure that comes with them, which is what Fracture lacks, in my opinion. I felt as if the mysteries, secrets and twists were very obvious and couldn't believe Delaney wasn't figuring things out immediately! She is in a fragile mental state, however, so we'll give her a pass... The novel deals very much with Delaney's tough recovery, filled with parents who think she's hallucinating, friends who become angry at her unusual survival, boys who twist the wires in her brain and strangers who die soon after she predicts. Many decisions contribute to the one outcome and I liked how they were all connected!

Decker is Delaney's best friend and has been her neighbour for even longer. From the very beginning, it's apparent he has feelings for her, although Delaney's completely oblivious. I drove myself insane with the romance in this book! There are misunderstandings all around and other love interests come to stir the pot too. When Decker busies himself with a gorgeous girl, Delaney gets involved with Troy and doesn't correct Decker on her relationship with Carson, his best friend. There are fickle love triangles and squares everywhere, and you can't help but feel sympathetic for Delaney since she's just very confused. These relationships are a very large part of the novel because they impact on Delaney's decisions, mental state and so much more. I think Miranda developed them well, but I didn't hugely like or become invested in any of the characters.

Fracture is a novel that will make you thoughtful, but isn't filled with any fast-paced action or gripping mystery. The plot and characters are developed slowly and will feed your curiosity little by little as you progress! Although I did like the ending, I didn't feel completely satisfied or as if it affected me as much as it should've, but nevertheless, you may fall in love with this book much more than I did so give it a go! I think it had great potential but just didn't quite work out for me as planned!

Thoughts? Think you can suss out the plot? Read it already? :)
Find Megan on Twitter, Goodreads, Facebook, her website and blog.
Buy Fracture from Amazon, The Book Depository and Barnes & Noble.