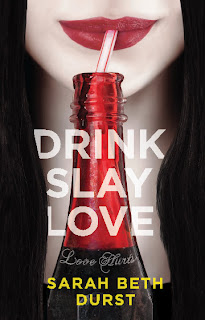 Pearl is a sixteen-year-old vampire... fond of blood, allergic to sunlight, and mostly evil... until the night a sparkly unicorn stabs her through the heart with his horn. Oops. Her family thinks she was attacked by a vampire hunter (because, obviously, unicorns don't exist), and they're shocked she survived. They're even more shocked when Pearl discovers she can now withstand the sun. But they quickly find a way to make use of her new talent. The Vampire King of New England has chosen Pearl's family to host his feast. If Pearl enrolls in high school, she can make lots of human friends and lure them to the King's feast -- as the entrees. The only problem? Pearl's starting to feel the twinges of a conscience. How can she serve up her new friends—especially the cute guy who makes her fangs ache—to be slaughtered? Then again, she's definitely dead if she lets down her family. What's a sunlight-loving vamp to do?
Drink Slay Love is a fabulous coming-of-age tale with a twist you'll love. This playful novel with serious undertones will wriggle its way into your heart as you become determined to see Pearl transform into a good person. After being staked by a unicorn, Pearl begins displaying signs of humanity and isn't hindered by typical vampire obstacles. With the Fealty Ceremony (a celebration of vampire adulthood) looming around the corner, her family begins preparations to host this grand event and it's up to Pearl to find human snacks. Unfortunately, her simple task spins out of control when she begins questioning her morals. Pearl's family consists of true bloodthirsty vampires who aren't concerned with the lives of lowly humans, and as she begins making true friends with the "food" at her new school, Pearl finds herself desperate to save them from the horrors that await them at her house. How will she protect her friends and please her family at the same time? Or will she have to pick a side?

Pearl's development as a character is spectacular. At the beginning of the novel she is your run-of-the-mill bad vampire. She seduces and taunts her prey, which she likes the flavour with ice-cream before going in for the drink. Imagine her surprise when she begins experiencing emotions like compassion, guilt and love! Throughout this journey, Pearl stays true to herself, being a strong individual with a streak for the extreme. Sarcastic as ever, she approaches the human lifestyle with flair and isn't afraid to be dramatic. Have fun seeing her outrageous outfits and stomping routines on unsuspecting car roofs! Your heart will go out to her as she removes herself from her overbearing family to do the right thing. Everything she's ever known has disappeared with a stab to the heart but she'll do what she can to make the most of her unique situation.

Of course, even vampires aren't immune to love. After several chance meetings with one Evan Karkadann, she finds that she can't resist his in-built nature to help and protect. As the two form a friendship which, of course, develops into something more, it doesn't matter that she's already promised herself to her vampire boyfriend, Jadrien. While he only sees Pearl's title and stunning looks, Evan sees inside her soul for the big heart she has. Doesn't that make you melt just a little? Caring and sweet, he'll take Pearl on a rollercoaster ride that'll change her life forever.

If you want to fall in love with a book that boasts strong characters, Drink Slay Love is for you. Don't hesistate as I did because I can assure you this is an touching story with substance. Mixed in with side-splitting moments of hilarity and subtle romance, it shouldn't be missed! Along with Pearl and her crazy family, you'll fall in love with the human cast, from wannabe vampire hunters to sweet best friends. Navigate through the clever mystery of Pearl's life as the novel deals with themes of self-discovery, the meaning of true friends and family loyalty. Drink Slay Love is utterly unique and will have you shelving it as a favourite for sure!

What do you think of the Australian cover? I must say, I do like the sleek look of the US cover more but hey, you gotta love that bottle of blood ;)
Find Sarah on Twitter, Goodreads, Facebook, her website and blog.
Buy Drink Slay Love from Amazon, The Book Depository and Barnes & Noble.
Posted by Lisa at 6:35 PM