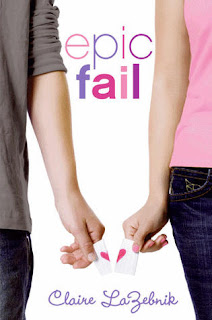 Will Elise’s love life be an epic win or an epic fail? At Coral Tree Prep in Los Angeles, who your parents are can make or break you. Case in point: As the son of Hollywood royalty, Derek Edwards is pretty much prince of the school—not that he deigns to acknowledge many of his loyal subjects. As the daughter of the new principal, Elise Benton isn’t exactly on everyone’s must-sit-next-to-at-lunch list. When Elise’s beautiful sister catches the eye of the prince’s best friend, Elise gets to spend a lot of time with Derek, making her the envy of every girl on campus. Except she refuses to fall for any of his rare smiles and instead warms up to his enemy, the surprisingly charming social outcast Webster Grant. But in this hilarious tale of fitting in and flirting, not all snubs are undeserved, not all celebrity brats are bratty, and pride and prejudice can get in the way of true love for only so long.
Epic Fail is such a fun novel, one that will lift your spirits and give you the pick-me-up you're looking for! While it's light, humorous and very entertaining, the author manages to slip in a few serious and emotional scenes too. You'll speed through this book very quickly, being sucked into the engaging Pride and Prejudice-like story. Derek Edwards keeps himself at an arm's length away from everyone, always assuming the worst in people. It's not hard to understand, since his parents are the most famous celebrity couple in the world. Slowly, Elisa proves herself to be a true friend, not after his popularity or money, and we have ourselves a lovely beginning to a friendship, folks! Gee, I wonder where this will lead……

Elise is a fantastic character. She manages to keep her head straight, be responsible and fun in the chaos she calls her family. She and her three completely different sisters transfer to Coral Tree Prep, a fancy school where - wait for it - her father is a maths teacher and her mother is the new strict principal. Could high school get any worse? At times I felt like strangling every single one of her family members but thankfully, Elise's humour is endless. Her sarcasm and lighthearted wit is refreshing and will put a smile on your face for sure!

Now…the boys. Oh what a dilemma Elisa has gotten herself into. At first, she only has to deal with a hardened Derek, but then Webster Grant steps onto the scene! He's your typical nice guy, but Derek seems dead set on hating him. Of course, we think Derek's overreacting but maybe his accusations have merit… You won't have any idea about what the true story is until the end! Yes, even this fun romance has a mystery! I really did love both guys and the story the two share… *gasp* Unexpected!

The ending is lovely. It couldn't possibly end without a happily ever after but it's really all about the journey! Loved the plot and loved the characters - more please! I'm really looking forward to reading whatever Claire's got in store for us next. I'm quite sad that Epic Fail is a stand-alone! I could definitely spend some more time with this fun and dynamic cast of characters.

Did we have tons of fun reading this? :)
Find Claire on Twitter, Goodreads, Facebook and her website.
Buy Epic Fail from Amazon, The Book Depository and Barnes & Noble.
Posted by Lisa at 8:30 PM