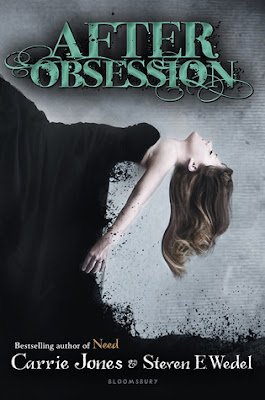 Aimee and Alan have secrets. Both teens have unusual pasts and abilities they prefer to keep hidden. But when they meet each other, in a cold Maine town, they can't stop their secrets from spilling out. Strange things have been happening lately, and they both feel that something-or someone- is haunting them. They're wrong. Despite their unusual history and powers, it's neither Aimee nor Alan who is truly haunted. It's Alan's cousin Courtney who, in a desperate plea to find her missing father, has invited a demon into her life-and into her body. Only together can Aimee and Alan exorcise the ghost. And they have to move quickly, before it devours not just Courtney but everything around her.
After Obsession is a creepy supernatural read with some truly chilling moments - don't read it at night! If you're looking for a nice blend of romance and supernatural thriller, this is the book for you! Aimee Avery and Alan Parson alternate as narrators as they both deal with the consequences of a suspicious drowning. Courtney, Aimee's best friend and Alan's cousin, has summoned a ruthless demon in her attempts to bring back her dead father. Will she make it out alive? Why is this demon so focused on Maine?

As Courtney begins displaying the symptoms of possession, the people in her life begin to behave strangely. Take Aimee's usually sweet boyfriend, Blake, for example. He becomes jealous, cruel and violent after the arrival of Native American, Alan, going to frightening lengths to keep her in his life. Everyone around Courtney has elevated levels of sadness and aggression, and it's not long before the whole town is poisoned by the demon's presence. I really enjoyed seeing Aimee and Alan work together to solve the mystery of the demon! We discover that it's been around for a while and has been involved in many other deaths….all very alarming stuff! The demon taunts, terrorises and plays with our minds, and we're constantly thrown for a loop as the unexpected keeps occurring. Both Aimee and Alan have their own unique supernatural abilities so anything is possible!


Mom, I promised to behave. It wasn't easy. I mean, she couldn't help herself. She was all over this hunk of Navajo manhood, and I had to keep telling her I promised not to let her violate me. Eventually she wore herself out and fell asleep.

While After Obsession has its creepy moments, it has its fair share of sweet and funny ones too! Aimee's always witty and Alan's the cheeky type, so we've got endless entertainment. Their relationship blossoms slowly as they go from acquaintances, to friends and finally to lovers. Although I liked seeing how their relationship grew, I didn't find their romance mind-blowing. This was probably due to my difficulty of connecting with the characters on a personal level. I followed their lives but didn't get sucked in and emotionally invested like I usually do, which is a shame! I think the character development was sacrificed a little for the plot, but the novel is still enjoyable. There are precious moments between the main characters, their friends, siblings, parents and other family members which are sweet and should put a smile on your face!


So, I take the pen out and hold it up and he's still like, "I need a pen. Anyone got a pen?" And I'm waving my pen in front of his face now, because I'm super annoyed that he's ignoring me, and I'm thinking, What? Is my pen not good enough for you, Justin Willis?

If you're in for something a little different, definitely give this book a try! We're able to explore ancient myths, American Indian history and more. Alan brings something unique to the story with his background and I think you'll enjoy it! I didn't realise that two authors co-wrote this book until the acknowledgements page (I know, I'm SO observant) but they worked so well together, I didn't notice the switches at all! After Obsession is sure to please thriller/supernatural fans.

Find Carrie on Twitter, Goodreads, Facebook, her website and blog.
Buy After Obsession from Amazon, The Book Depository and Barnes & Noble.
Posted by Lisa at 4:42 PM