What better way to start a droolworthy new update with some droolworthy writing? As most of you are aware, Jace from The Mortal Instruments and Ash from The Iron Fey faced off in the YA Sisterhood Crush Tournament, with Jace coming out on top! As a reward, Cassie gave us a delicious deleted scene from City of Glass! Remember the hot making out at the manor in the grass? Well, a whole chunk we've been lusting after has been served to us on a steaming hot platter.... ENJOY! Don't drool too much. Cassie's given us an OUTTAKE from City of Lost Souls too! That woman spoils us rotten. While we're on the topic of The Mortal Instruments, filming is said to start early 2012! I'm very happy that we've finally got some sort of timeline. Want this movie NOW! Vote in the Crush Tournament Finals HERE. 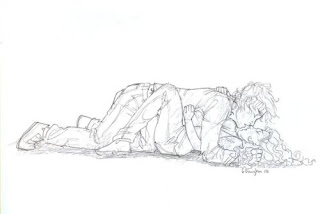 Cynthia Hand released the UK cover of Hallowed. I love that a male model's been used! I see barely any of these so it should make a nice addition to my bookshelf. How do you think it compares to the American cover? I, myself, prefer this one... But as a whole series, how am I supposed to decide? US, UK or Aus? I really want a matching set of books so I'll probably be waiting until book 3 to buy them! I've had a glimpse at the Australian cover, but unfortunately can't show you all. I'm liking it though! 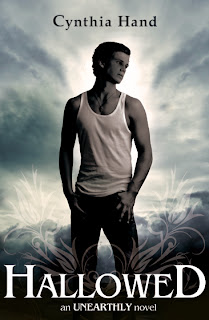 Catching Fire has a release date! The movie is set to come out on November 22nd 2013. How excited are you that things are already planned and moving along so well? Pictures from the Hunger Games movie were also released recently Check them all out HERE if you've missed out! Look forward to seeing this movie on March 23rd 2012 ;) Pictures are looking good!

You guys remember the Bloodlines challenged I talked about a few weeks ago, right? No? You suck. *wink* Anyways, Richelle hit her target of 10,000 pre-orders! I think it's fantastic and wish her many thousands more. I know this new series will be brilliant and just as amazing as Vampire Academy. With the kind soul she has, Richelle gave us the original beginning of Bloodlines, when narrators (in third person POV) would change every chapter. Let us welcome....Adrian Ivashkov! Oh, tell me your heart doesn't crumble a little when you read THIS! 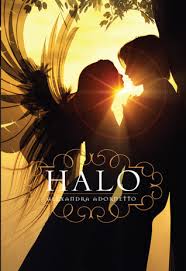 Who's read Halo by Alexandra Adornetto? Surely, you've seen these gorgeous covers! Well, if you're a fan then you've got to watch the trailer for Hades, which will be released at the end of this month. I've yet to read this series but I will very soon! September? ;) Two completely different trailers below. Which one's your favourite? Are you a fan of this series?


What's got you the most excited? Are you loving these author gifts or what? ;)
Posted by Lisa at 4:50 PM