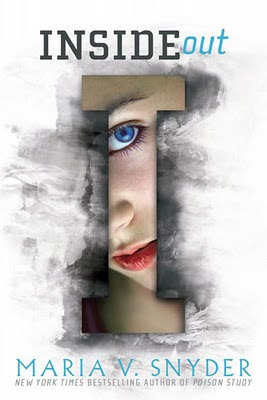 I'm Trella. I'm a scrub. A nobody. One of thousands who work the lower levels, keeping Inside clean for the Uppers. I've got one friend, do my job and try to avoid the Pop Cops. So what if I occasionally use the pipes to sneak around the Upper levels? The only neck at risk is my own…until I accidentally start a rebellion and become the go-to girl to lead a revolution.
WARNING: Long review. Deal with it. It's too good not to gush about. *wink*
Inside Out reminds me of Across the Universe, but instead of being trapped in a spaceship the characters are in a big cube, sectioned off into four levels with 9 sectors each. (Click for diagrams) Snyder's attention to detail is obvious from the beginning and this is definitely one of those books that you have to really digest and understand before you move on. Dash off too quickly and you might find yourself confused later on and not get the full effect!

The concept behind Inside Out was fantastic. The place they live in is a confined space called Inside, which has a large network of vents and pipes. The main character is skilled in navigating them and she initially goes to the pipes to avoid the snide remarks from her peers, tired of their misconceptions about her. The novel revolves around an almost-adult Trella as a small mishap leads to her search for Gateway, the doorway to Outside which may or may not be real. They say that Outside is a spiritual place where you go after hard work and death. Trella's friends say that Outside is an actual place which can be accessed through Gateway, a tangible door somewhere in Inside. Trella risks it all to search for something which essentially may not even exist and suspense is high as we get closer to finding the truth. From the beginning, you wonder why they're stuck in this cube and how everyone got in there to begin with. Is it just a big building in the city? Down in the centre of the earth? Inside Out will keep your mind churning as you attempt to figure everything out. Good luck with that...

Trella is, plain and simple, a loner who is very stubborn and doesn't trust easily. It was difficult to relate to her standoffish and pessimistic character at first, but then you realise her motivations and slowly warm up to her as you watch her hard exterior chip away. Being manipulated by the rulers, she has warped views of the Uppers and doesn't fit in with those around her. She has a strong personality and isn't one to conform to the rules set for their society. The rulers are harsh and very strict, relentless in their mission to remain in control. No one knows exactly who is in charge but it's safe to say, they don't have may fans. Do something bad? Get sent to the Chomper. Even that doesn't sound nice.

The most adorable character comes in the form of a stuffed toy. His name is Sheepy and he's…you got it…a sheep! There's a mama Sheepy too and these toys will make even the hardest people melt into a puddle of goo. It's probably not the toys themselves but just what Riley, the love interest, does with them. They've been his since he was little and he's got fond memories ;)


Riley pressed his nose against the sheep’s as if communicating with the stuffed toy telepathically. He pursed his lips and nodded. “Sheepy says he’s hungry.” He quirked a smile at me. “Sorry. Oh…wait.” Once again, Riley stared at his toy. “Sheepy also says he doesn’t believe you’re a stupid scrub. In fact, he thinks you’re quite smart and if you say otherwise, he’ll bite you on the leg.”

Tell me that didn't make you smile. Not only is Sheepy adorable, but Riley too! He's a black-haired and blue-eyed Upper boy who meets Trella in a very unconventional way. She literally drops into his life through an air vent - cue massive giggle session. Riley's intelligent, determined and playful, as you can see. I thought the two made a great couple and I loved watching their relationship grow. It was  difficult because of the circumstances but still beyond cute with their teasing and sly glances! Now, where can I get my Team Riley shirt….

I would definitely recommend this novel to everyone. While there's some romance, there's a lot of mystery and action (big emphasis on the mystery). If you're sick of those same monotonous YA novels you need to read Inside Out immediately. There's something in it for everyone so I'm confident that there won't be any disappointed readers! This is a very engaging novel with twists and turns that promise zero boring moments.

Find Maria on Goodreads, Facebook, her website and blog.
Buy Inside Out on Amazon, The Book Depository, Barnes and Noble and Borders.

I'll be giving away my copy of Inside Out and Outside In soon once I post the second review so look out! ;)

One of the greatest book trailers I've seen ^^