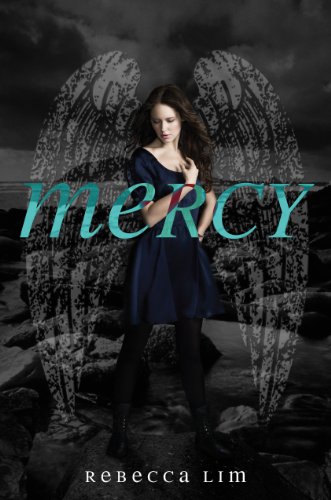 As an angel exiled from heaven and doomed to return repeatedly to Earth, Mercy is never sure whose life and body she will share each time. And her mind is filled with the desperate pleas of her beloved, Luc, who can only approach her in her dreams. In Paradise, Mercy meets Ryan, whose sister was kidnapped two years ago and is now presumed dead. When another girl disappears, Mercy and Ryan know they must act before time runs out. But a host of angels are out for Mercy′s blood and they won′t rest until they find her and punish her -- for a crime she doesn't remember committing...

Mercy has taken over the body of a girl named Carmen, who has come to a small town, Paradise, to live with Ryan's family. As I read this novel without the summary fresh in my memory (I was internet-less), it was a little difficult for me to connect and immerse myself in Mercy at first, having no idea what I was reading. As I continued, the skilful blend of mystery and romance pulled me in, keeping me on the edge of my seat as the main characters investigated the kidnappings.

There are several plot lines which intertwine in this novel - Carmen's life which is controlled by Mercy, her relationship and adventures with Ryan, and Mercy's own life as a past angel plus her relationship with mysterious Luc. The protagonist herself is confused about what is happening and who she is during most of the book, and this unfortunately had me quite confused as well. Just about every scene with Luc flew over my head, so I have no clue what happened there. I found the story lines about Carmen and Ryan much more enjoyable to read about than Mercy's own, as Mercy's fallen angel plot is not explained or addressed much. I don't think you'd even know that she was an angel without reading the summary first.

Nonetheless, Mercy is a very suspenseful and mysterious book. There are many twists and turns, and the identity of the kidnapper comes as an absolute surprise. You don't find out who it is until the very end so the mystery is present throughout the whole novel. I felt the romantic element of the novel didn't make much sense and was a bit useless. Other than Ryan being pulled out of his shell where finding his sister was the only thing that mattered, Mercy and Ryan's relationship seems to have no purpose. They don't have a reason to like to each other and their relationship isn't explored at all. Hopefully this is expanded more on in the next book, as well as her confusing relationship with Luc, her "eternal beloved".

It is not until the final third of the novel that I started loving it for good. As Mercy gets closer to finding the kidnapper and things begin falling into place, everything suddenly becomes very exciting. We are left with a shocker of a cliffhanger so I will definitely be picking up the next book, Exile, in hopes of an improvement! I look forward to finding out where Mercy will be taken next and what will happen between her, Ryan and Luc.