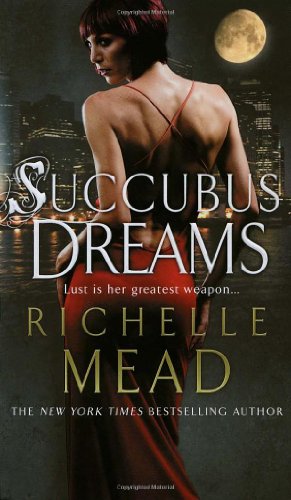 Some days, a girl just can't catch a break......especially when the girl in question is Georgina Kincaid. First there's her relationship with gorgeous bestselling writer Seth Mortensen, which is unsatisfying on a number of levels. It's not just that they can't have sex in case Georgina inadvertently kills him. Lately, even spending time together is a challenge. Seth's obsessed with finishing his latest novel, and Georgina's under demonic orders to mentor the new (and surprisingly inept) succubus on the block.Then there are the dreams. Someone, or something, is preying on Georgina at night, draining her energy, and supplying eerie visions of her future.

Prior to starting Succubus Dreams, I read reviews and sort of knew what to expect. I pieced together that Seth does something terrible to make everyone hate him, so I went into this one very apprehensively. What could Seth have done? It had to have been more than being ignorant and distant, right? As the story begins, it becomes very obvious what will happen. I won't spoil, but I can say that I was suspicious right from the get-go. It doesn't make me any less upset, but I guess I should just be thankful that the problems and the climax came slowly. I was fully expecting heartfail by the halfway point, so I was actually very relieved that it didn't come until towards the very end. Don't let this discourage you from reading though! It has to get better some time!

As for the rest of the plot, let me just firstly say…oh my goodness, Tawny! I thought her character was great and I couldn't help but love her (…or hate at times…). I was very excited to see Georgina show Tawny the ropes of being a succubus and to see the two do their succubi thing together. It's a shame we didn't get to see very much of that but I guess Richelle had more important things to write about. Things like, say, the mystery creature that's draining Georgina's energy. This has to be my favourite plotline as of yet because it's tied in with everything else and is just written very well. We always feel the eerie and foreboding mood so the book turns out to be quite intense. On her quest to save her life (seeing as everyone is too busy with their own problems), Georgina meets Dante, a dream interpreter/con artist with ties to the underworld. Dante appears to be interested in Georgina but no one, I think, is really shipping that.

Succubus Dreams also brought out a few more new characters in the form of angels - Yasmin, Whitney and Joel. We are introduced to Vincent too, a supposed human, who ends up having a very interesting backstory that ties in with Yasmin. I loved Vincent, and found his scenes very sweet and enjoyable. Whitney and Joel mostly floated around in the background and so made no significant impact on me. Niphon, the imp who is responsible for turning Georgina into a succubus way back when, also returns and we make interesting discoveries as the reason for his appearance unravels.

In conclusion, I enjoyed this book immensely. While Georgina and Seth weren't at their best, I still enjoyed reading about of Georgina's past, meeting the new characters, watching the main plot pan out, etc. Succubus Dreams will leave you hoping for more smiles in Succubus Heat, but never fear, Richelle Mead won't let us down!